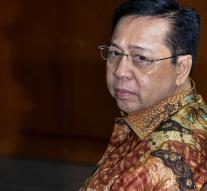 jakarta - The former chairman of the parliament of Indonesia has been sentenced to fifteen years in prison because of corruption. Setya Novanto, according to the court, was involved in large-scale fraud in a project for a new national identity card.

The scams cost the State of Indonesia an estimated almost 140 million euros. The former chief of the important political party Golkar also has to pay a fine of almost 30,000 euros.

Novanto has been associated many times with corruption but never before convicted.