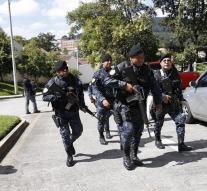 guatemala - A former Minister of Finance of Guatemala's more or less accidentally killed in a raid by the police during an anti-corruption operation. The former Minister Pavel Centeno stood for unclear reasons in a house where police raided and was slain by police bullets.

According to Justice Centeno probably lived in a house of one of the suspects. The invasion was not directed against him. During the operation police raided at eighteen addresses in an investigation into a corrupt network in a semi-state bank.

Centeno was finance minister in the government of President Molina between 2012 and 2015. Molina had to step down after allegations of corruption.