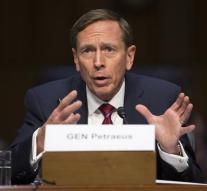 - The former director of the CIA, General David Petraeus is the next US president Donald Trump, Monday sounded out about the post Minister of Foreign Affairs, some US media reported.

The 64-year-old Petraeus is of Dutch descent. He grew up north of New York, and his father was a ship's captain from Franeker who settled at the beginning of World War II in America.