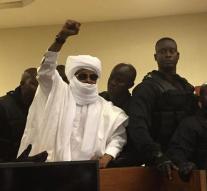 dakar - Chad's former ruler Hissène Habré is appealing against his conviction for crimes against humanity and war crimes. That said Saturday a spokesman for the African Special Court that had conducted the trial in Senegal.

Habré was late May by a special court in Senegal sentenced to life imprisonment for rape and give the command for murder and torture of thousands of political opponents during his eight-year reign. He ruled the African country from 1982 to 1990. Those years were dominated by the conflict between Chad and Libya.