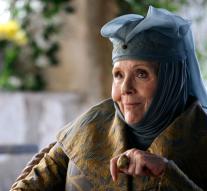 london - Actress Diana Rigg, in " On Her Majesty's Secret Service " James Bond's wife played, can imagine a future agent 007 black or lesbian. " A black Bond would be great, " said the 77-year-old actress by the magazine Radio Times Tuesday.

A female Bond would be a lesbian because " we do not want to lose the Bond girls ", she said in the interview. Rigg starred in 1969 alongside George Lazenby the role of Tracy, the only Bond girl married the secret agent. It was the sixth James Bond film based on the eponymous book of 1963 by Ian Fleming.

Diana Rigg, also known for The Avengers, is currently on display include as Olenna Tyrell in the popular TV series Game of Thrones.