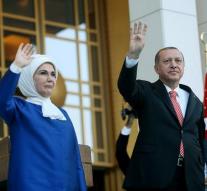 ankara - The evolutionary theory of Darwin has been removed from the new curriculum for Turkish schools. Turkish students will only be heard later on in the biology class, for the rest, the subject will only be discussed at the university. 'For students it is still too high,' said Minister of Education Ismet Yilmaz on Tuesday.

That attitude calls Mustafa Balbay of opposition party CHP offensive to students. 'You give an eighteen year old the right to choose and to be chosen, but not to learn about evolution theory,' he shook.

The new curriculum also demands that religious schools, which increase in number, bring children to the 'jihad' as a nationwide spirit.

The chairman of the Bond of Educational and Scientific Staff (Egitim-Is) is unable to speak about the new curriculum. The new policy that puts an end to evolution theory also prescribes that all schools have a prayer room. 'This destroys the secular and scientific foundations of education,' said chairman Mehmet Balik. He believes that the changes are being implemented to ban outright ideas. 'It's about generations asking questions, that's what the government is afraid of,' said Balik.