Home / World / Everyone looks at Florence- but this is 'supertyphoon' Mangkhut 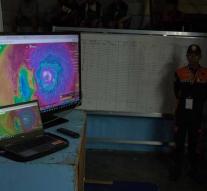 manila - While hurricane Florence is operating along the American East Coast, an even heavier tropical storm is currently flying over the Philippines. Typhoon Mangkhut is especially a threat to Luzon, the northernmost island in the Philippines where the capital Manila is located.

Millions of Filipinos live in the path of the storm. The government in Manila has told them to stay at home and to prepare for heavy rain and damage due to the wind. Several thousand people have been evacuated.

The damage that Mangkhut causes will not only be in the short term. The typhoon travels over an area where grain and rice is grown, and the fear is that harvesting will partly or completely fail as a result.