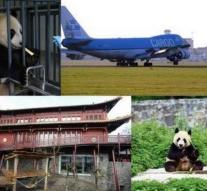 chengdu - It will Wu Xing Ya Wen and take a moment for the two giant pandas will soon be accustomed to their new environment in Ouwehand Zoo in Rhenen. Even pandas suffer from jet lag. Pandas have not the same emotions as humans. If they all get homesick, than from those in physical symptoms. 'They will be particularly affected by their intestines. They eat the first two or three days nothing. They may even lose weight. '

Wednesday they fly two from Chengdu, in the middle of China, to the Netherlands. It takes about two weeks before they are accustomed to their new residence in Rhenen.

Meanwhile, everything is ready for the journey of the pandas. Until the moment of departure, they are kept away from other animals and the public. Only at the airport media may pandas and their caregivers see again here.

To Wu Xing Ya Wen and not completely throw in the deep, there is a familiar caregiver with them to the Netherlands. That familiar face stays with them until they are used.

Pandas get 500 kilos of bamboo along. They can join in about ten days. Thereafter Ouwehands animal ensures the supply of fresh bamboo.

The Chinese love the giant panda, which they regard as a cute stuffed animal. But the panda is above all an ambassador for China, deployed by Beijing to strengthen ties between countries. Pandas are owned by the Chinese state, and also any panda boy remain Chinese ownership.

The pandas who go abroad have a clear job description. Does the Queen of Spain in the Madrid Zoo for a walk with a panda, you get that Chinese television. Also met the Chinese media panda craze in Rhenen. The symbolism is crystal clear: Netherlands loves pandas, the Netherlands also love the Chinese. 'If the Chinese government wants to strengthen ties with a country, then it sends a koppeltje go,' said Qunxiu

The Chinese are proud rather than sad about the departure of the giant pandas. A luxurious multimillion residence is decorated for their ambassadors, adds to that pride. 'The Netherlands is looking forward to the arrival of the Chinese giant pandas,' headlines the Chinese news website NetEase in a report on the new panda stay Ouwehand Zoo. 'That seems great luxury. Here the giant pandas are being happy, 'said one reader in a comment.