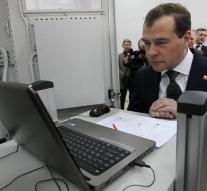 moscow - Times New Roman is perhaps the best-known font in the world. It is widely used. In Russia, however, a shortage now the US supplier Monotype Imaging does not deliver more font. The company relies on the current US sanctions against Russia.

Monotype Imaging owns the rights to some of the most famous fonts. Apart from Times New Roman supplies Verdana, Arial and Tahoma. Times New Roman, writes the Russian newspaper Kommersant Monday, is widely used in Russia. The famous driver Astra Linux applies it. This operating system is used by some ministries and government organizations such as Defense, Education, security and customs.

The sanctions were imposed in 2014 following the annexation by Russia until then Ukrainian peninsula of Crimea.

Times New Roman was designed in the thirties of the last century for the British newspaper The Times. The designer was Stanley Morison of Monotype.