Home / World / Evacuees after gas explosions US can go home 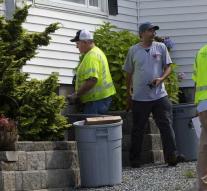 north andover - Thousands of people who had been evacuated because of a major gas leak in the US state of Massachusetts are allowed to go home. In the course of Sunday they have electricity again. All gas connections are closed.

All residents of Andover, North Andover and Lawrence were forced to leave their homes because of a major gas leak. Certainly one person was killed and dozens of buildings caught fire. Public life came to a complete standstill.

According to the authorities, the leak is probably caused by too high pressure on the pipelines. The chief of the fire department says he has not heard anything from gas company Columbia Gas, which uses the pipelines. The governor says that Columbia is working on the problem. How long that will take is not known.