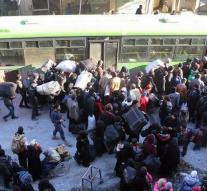 aleppo - The evacuations be resumed in the Syrian city of Aleppo. According to the Red Cross, the warring parties, the rebels and the government, which Sunday agreed after long negotiations.

Friday the evacuations were discontinued put after there would be fired on the bus with evacuees. Saturday morning it seemed that the evacuation would be resumed as sources of both the rebels and the government reported this but nothing happened.

The UN Security Council vote Sunday on a French proposal to hold the UN official overseeing the evacuations. It is unclear whether Russia or against the resolution to vote.