Home / World / Evacuations by fire on Greek island of Chios 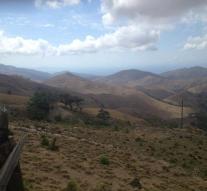 athens - On the Greek island of Chios raging since Monday morning a fire fueled by strong winds, extreme heat and drought. The places Lithi, Elata and Mesta have been evacuated as a precaution in the southwest of the island, local media reported.

Three water-dropping planes, two helicopters and fifteen fire engines are trying to fight the fire. The smoke from the fire can be seen on satellite images, and is driven by the strong wind over the sea to Crete.

Four years ago, a fire on Chios more than 12 700 hectares of nature to ashes, including nearly 40 percent of the economically important mastic. The resin of the trees are used in the pharmaceutical industry, for the preparation of chewing gum, beverages and food.


Greece is currently facing as a result of the heat with several fires, both at various islands and on the mainland.