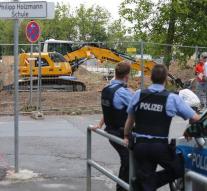 frankfurt - In Frankfurt, the largest evacuation in Germany has begun since the end of World War II. More than 60,000 people have to leave their homes before Sunday's unpacked English plane bomb becomes harmless.

On Saturday, a temporary move was made to patients from two hospitals in the risk area.

'So far there are no problems,' said a police spokesman. Apart from the two hospitals, ten nursing homes will be cleared on Saturday.

SEE ALSO: 70. 000 people from home in Frankfurt on Sunday

There is also a great police force on Saturday to warn offenders, who may want to benefit from the absence of residents to break into homes.