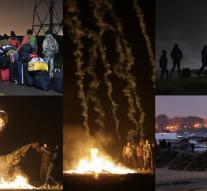 - The evacuation of the refugee camp in the northern French town of Calais has begun. Hundreds of immigrants formed long lines on Monday morning for a registration center at the camp, which is also called the 'jungle'.

The migrants are distributed upon registration throughout France. They have submitted two regions from which they can choose, with the exception of Paris and Corsica.

In some places it came in the night from Sunday to Monday to riots, when migrants were trying to break out to a nearby highway. The police pushed them back, there were no casualties.

In the camp stayed around 6,500 people in tents and huts. From Calais they hoped to illegally cross over to England. The evacuation takes about a week.