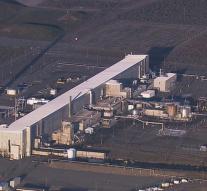 hanford - The US authorities evacuated staff on Tuesday from Hanford's former nuclear complex in Washington State. Part of a tunnel may have collapsed, thus releasing contaminated material.

There are no reports of wounded or about the release of hazardous substances. In reactors in Hanford, World War II began to produce plutonium for the US nuclear weapons program.

In 1980 an end to plutonium production began and in 1989 the site was cleaned. The complex is now being used for the storage of nuclear waste.