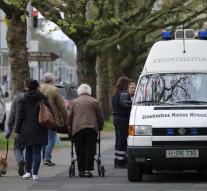 hannover - The evacuation of Hanover's 50,000 inhabitants, one of the greatest evacuations since World War II, has progressed well. At the beginning of the afternoon, the police launched a helicopter with heat cameras to detect any remaining residents in the enclosed area. When it is ready, the explosive cleanup service can begin dismantling the bombs that are likely to be on a building site.

Police, with 600 agents on duty, and fire brigade started Sunday morning warning and bringing the people who had to leave their homes out of precaution. That went well. The evacuates are captured elsewhere in the city, including entertainments in museums, cinema films and a recreation program.