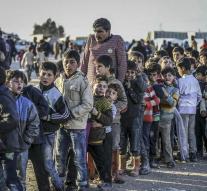 aleppo - The evacuation of wounded combatants and civilians from the eastern districts of Aleppo is about to begin. Confirm that both sources at the Syrian regime as the International Red Cross on Thursday.

A spokesman for the rebels reported that a file has been entered at half past two at night. Sources say that in the early Thursday morning indeed no shots have been observed. Wounded and citizens than in the course of the morning to leave the area controlled by the opposition.

According to the Syrian Observatory for Human Rights are however still ongoing fighting in the night between Wednesday and Thursday between rebels and soldiers of the Syrian army.