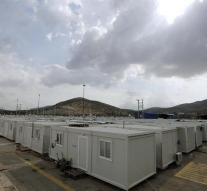 - Police organization Europol sent within weeks two hundred terror experts to Greece to screen in migrant camps on terrorists. That Europol director Rob Wainwright said in an interview with the British Evening Standard.

,, The agents will be deployed rotating in the Greek islands and perhaps in Italy, '' said Wainwright.,, It is a second line of defense. We hope to put some people in the camps where refugees, asylum seekers are housed. We worry about stories that these centers people are radicalized. ''

Wainwright said, surprised to be that terrorist organization Islamic State has not made greater use of the refugee crisis to get extremists in Europe. The number of foreign fighters reaching the continent with false papers, however, is increasing.