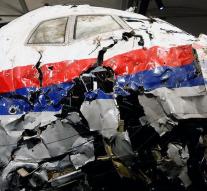 brussels - To prevent another disaster like that is happening with flight MH17 in Ukraine, should be alerted at European level for the risks. As far as the transport committee of the European Parliament, the European agency going for the Aviation Safety Agency (EASA) do.

In Thursday approved draft regulations EASA will have the power to issue guidelines and recommendations on the fly over conflict. The proposal also sets a European standard for safety devices such as scanners. In addition, airline workers should offer decent working conditions to minimize security risks.

The parliament is now negotiating with the EU Member States on the final legislative text. MEP Wim van de Camp (CDA) reacts delighted. 'The safety of passengers is too important to be dependent on the choices made by airlines for something shorter journey or cheaper routes. It does not explain that in the event of accidents in conflict areas, such as MH17, one European aircraft chooses a different route than the other. 'His colleague Matthijs van Miltenburg (D66) has long calls for a central European approach to safer routes.

ICAO, the UN's civil aviation organization, decided last month to regulate the sharing of information on the safety of the airspace over conflict better. Also to preserve his country now obliged radar images and share research after a plane crash. Airlines are obliged to make risk assessments for flights over conflict.