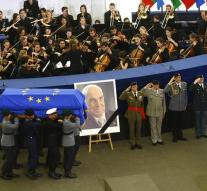 strasbourg - Eight soldiers from the Bundeswehr and the Eurocorps arrived in Strasbourg with the chest of deceased Chancellor Helmut Kohl in Strasbourg.

Heads of state and government from Europe and other guests prove him the latest honor. Kohls chest is not covered with a German but with a European flag.

The President of the European Parliament, Tajani, called Kohl a great statesman. 'He was especially a brave man. Founder of Liberty and Democracy. He organized for our continent. Defended it against the Berlin wall, the iron curtain and the totalitarian dictatorship. Ensured freedom, prosperity, peace and justice in Europe, and reconciliation between Europeans. He took care of the rebirth of Europe. And he belonged to the last generation who experienced the nightmare of Europe in the war. '

EC Chairman Juncker: 'I'm goodbye to a loyal friend. He was a postwar giant. Throughout his life he entered the history books. He became a continental monument. He wanted to say goodbye to Strasbourg here. A German-French border city in Europe. However, this is not a non-German, but a European ceremony.

Kohl was a German and European patriot. That was not a contradiction to him. He sought a European Germany, not a German Europe. He grabbed the cloak of God, who had a blow through history for a short while. He felt that the German unification was graspable in 1990.

Helmut Kohl had always had a look for Eastern Europe and Poland. Know the crimes of the Nazis. The enlargement of Europe with Eastern Europe was unimaginable to him. He contributed to reconciliation and ended the division of Yalta.

With the enlargement of the European Union with Eastern Europe, Kohl has seen cry for minutes. This day belonged to the most beautiful moments of his life. Without Kohl there was no euro. That was for him peace policy by other means. He further respected all EU Member States, the big but especially the small countries.

We have been removed a few meters from the Rhine, the Rhine, which separates two countries. Strasbourg is the capital of Europe for Kohl. You deserved rest, dear friend. Eternal peace. '