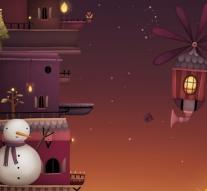 - The idea to create an original Christmas game led to a collaboration between the Slovenian Damir Stuhec developer and the Dutch illustrator Lea Vervoort. Santa and his reindeer are not even central to the iOS game Moonlight Express.

Moonlight Express (€ 1.99) is about equality and that every child has the right to the magic of Christmas, where or what. It is based on the familiar Christmas story, but told with a twist. On Christmas Eve Santa will fly deliver gifts, as his reindeer do not fly. He calls a boy named Palti for his nightly deliveries 'Moonlight Express'. Palti promised to do his best to meet the wishes of Santa Claus. The players job to help him.