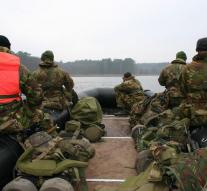 brussels - The EU is on the eve of extensive defense cooperation. A real European army does not have to be in touch with the European Commission, but extensive integration of the armed forces is inevitable, given the increasing uncertainty in the world around us.

This is evidenced by a plan that today's EU administration presents on European defense cooperation. Three scenarios are given for the future, ranging from a little extra action ('progress scenario') to joint military operations, which fully endorses the military planning of the Member States. The plan is intended as a 'discussion paper' for the future of the EU. Government leaders will make decisions before the end of the year.

Even in the most far-reaching scenario, there is no European army. Countries remain sovereign about the efforts of their army. Nevertheless, the last option means that there is indeed very far-reaching integration through a true common defense policy.

With the second option, cooperation is the norm and national defense plans are coordinated, for example in the joint acquisition of equipment. The Netherlands is reported to be the most pervasive, as this is in line with the ambition to make more work on European security policy.

The Commission points to the potential of European defense, but it does not work effectively enough because of fragmentation. The lack of cooperation in the field of defense and security costs an estimated 25-100 billion euros annually.

The Commission is also presenting a proposal for the implementation of a European Defense Fund, announced earlier. In the medium term, the budget must be raised to half a billion euros a year for joint research and one billion for the development of drones.

The plans for far-reaching European defense cooperation come when the relationship with the US has fallen below the freezing point. President Trump believes that Europeans need to do more to their own safety.

The United Kingdom was always very reluctant to make the EU more in defense. But the UK is leaving the EU, and Germany and France want to do more together. Meanwhile, the British are behind the scenes to agree with the creation of a European military branch, which is officially embraced on Thursday. It is part of the EU foreign service and there are about thirty people working to coordinate existing EU missions in African countries. In some EU countries there is the fear that it is a step towards a real European military headquarters. That name should not have it.