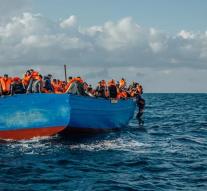 Today, Commissioner Avramopoulos comes with the plans. Thursday in the Estonian capital of Tallinn, EU ministers meet to discuss the issues.

One of the problems is that the asylum procedure in Italy takes far too long. So it should be better. The country must make a decent registration, according to the Commission.

If Italy is better off, then that means that more asylum seekers must be redistributed across Europe, something that countries in Eastern Europe are opposed to. The link between Brussels money money, the so-called cohesion funds, the willingness to cooperate comes closer, it is threatening in Brussels.

What is also on the table is to impose stricter rules on NGOs. Relief organizations often pick up refugees at the middle of the sea, where they are left behind by traffickers. But in fact, the help clubs act as an extension of human traffickers, is the common criticism. It could be forbidden to be imposed in Italy.

Avramopoulos spoke in Paris with the Ministers of Home Affairs of Italy, France and Germany in Sundays.