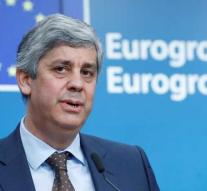 lisbon - The Portuguese police have invaded the Portuguese Ministry of Finance. According to local media, the raid was aimed at Eurogroup chairman Mario Centeno who would have accepted tickets from his favorite football club Benfica.

The public prosecutor confirmed the invasion, no arrests were made. Centeno, who succeeded the Dutchman Jeroen Dijsselbloem on 13 January, denies that he has done something illegal. According to the Portuguese website Expresso, the President of Benfica would have asked the Portuguese Minister of Finance for a favor. In exchange for that favor, Centeno wanted two tickets for a football match at Benfica in the presidential lodge.

Government officials may not accept gifts with a value higher than 150 euros. Tickets for the lodge are not sold, they are only by invitation.