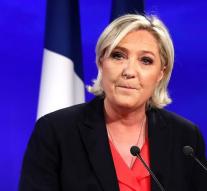 paris - After the disappointing score last night, Marine Le Pen wants to reform the Front National. How is not yet clear, but the flow within the party that is skeptical about its position on the euro and the European Union is beginning to stir up.

Almost ten million of the votes, 34 percent on the total of the electorate. A higher score has never had the Front National. But Marine Le Pen had hoped for 40 percent, actually on more. 'It's not a defeat, it's a non-victory', one of her spin doctors tried to soften the bitter pill. 'The Front National has to innovate thoroughly to take advantage of this historic opportunity and meet the expectations of the French,' Le Pen said last night at her Bois de Vincennes finals.

Le Pen made a flying start with her election campaign shortly after the first round. The polls gave her around 40 percent of the votes, but they ended up with much less. One of the reasons for her is her poor performance during the election debate last Wednesday, in which she attacked Emmanuel Macron. She gave barely substantive arguments and played only the man. A strategy by her right-wing Florian Philippot, European parliamentarian and municipal councilor in East French Forbach.

She also made her euro point in the last week for the second round ever more complicated. There had to be a kind of ecu for international payment, the Frenchman would get a franc again to pay in his own country. And the need was no longer so high: where Le Pen earlier said that she would negotiate with Brussels in the first six months of her presidency, it suddenly became one and a half years.

That already indicated that they realized that the French did not necessarily need the euro and the European Union at all. In her pursuit of François Fillon from Les Républicains, she became aware that especially the older voter should not have any of these types of capriots: fearing that all kinds of uncertainties endanger his retirement.

Her father Jean-Marie called the outcome of yesterday a 'disappointment' and expressed her views on Europe as guilty. According to him, the captain of this flow, Philippo, can keep up with the future.

With this, Le Pen senior has appointed a break line within the party. On the one hand there is the camp of the 'Philippotists' who want to give France more sovereignty and advocate a left-wing economic line, such as reducing the retirement age from 62 to 60. On the other hand, there are the 'Marionists', the Followers of Marine's Arch Conservative Cousin Marion, who wants to abolish gay marriage and, in the economic sphere, is much more liberal, just like her grandfather. 'We must think carefully because we have not been able to make a referendum for or against France,' she said yesterday, so her aunt had proposed the poll.

Yesterday it turned out that there is indeed a glass ceiling for the party, and that the rigorous course of Europe frightens voters. It is the question of whether the party has left another way before the parliamentary elections of 11 and 18 June. There are voting in order to change the name of the party. In practice, the party is already called 'Rassemblement Bleu Marine'.