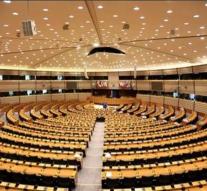 brussels - Euro-parliamentarians receive a total of 40 million euros tax on expense compensation, including for an office in their own country. But more than a third has no working space outside Brussels. It remains unclear how to spend their rich cost of 4300 euros a month or so.

This is evidenced by a European research project of 48 collaborative journalists, including the NOS.

Many European parliamentarians did not want to answer any questions about spending their expenses, including the entire delegation from Bulgaria and Poland.

The members of the VVD, the PVV and the SGP did not answer the questions from the Dutch parliamentarians. Four Dutch European parliamentarians said that, besides Brussels, they have an office in our country. Peter van Dalen (CU) hires spaces at the party office. Wim van de Camp (CDA) has an office in the Lower House. Gerben-Jan Gerbrandy and Marietje Schaake (both D66) also have a work space in the Netherlands.

The other European parliamentarians work from home if they are in the Netherlands. Brussels is relatively close to the Dutch, so a local office for them is less necessary.