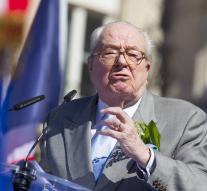 brussels - The European Parliament has seized half the salary and daily allowance of the French MEP Jean-Marie Le Pen. The controversial former leader of the right-wing populist National Front refuses to pay back more than 320,000 euros paid to an employee group could not prove whose employment Le Pen, says the EP.

Le Pen is fighting the seizure in, told his lawyer, according to French media.