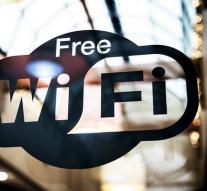 brussels - There are free public Wi-Fi hot spots in six thousand to eight thousand municipalities in countries in Europe. The European Commission, the Council of Europe and the European Parliament have reached political agreement on the financing of these hotspots. They deduct 120 million euros.

Access points include hospitals, libraries and other public places. Municipalities can apply for funding.

The agreement must be officially ratified by the European Member States in the coming weeks.