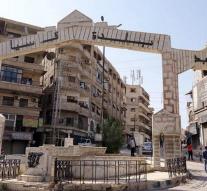 luxembourg - All 28 EU countries call on Russia to take responsibility and contribute to ending the conflict in Syria. The bombing of Aleppo should stop as soon as possible and Russia should help to create the conditions for a ceasefire.

EU foreign ministers were here Monday in Luxembourg 'clearly and completely unanimous' on said EU foreign policy chief Federica Mogherini. The truce is in its necessary to get humanitarian aid to the eastern Syrian city and evacuate the wounded. 'The situation in Aleppo is disastrous. '

Proposals for sanctions against Moscow because of Russia's support for the regime of Syrian President Bashar al-Assad were placed under Italian not on the table.