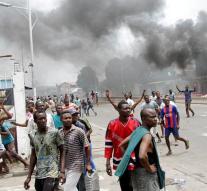 luxembourg - The European Union is preparing sanctions against the Democratic Republic of Congo dissatisfaction with the postponement of the presidential elections scheduled for next month. The African country decided Sunday to keep until April 2018. According to opposition parties is the only way for President Joseph Kabila to remain in power. According to the law he would otherwise end have resigned this year.

European foreign ministers in Luxembourg Monday demanded that everything be done to let the elections take place next year. They threaten to deploy in a statement 'all available tools' including travel bans and the freezing of bank accounts of people who have committed human rights violations and / or a peaceful solution to the conflict stand in the way.

EU foreign policy chief Federica Mogherini was to prepare the contract penalties. The US has already imposed sanctions on three aides to Kabila, partly because of blocking the democratic process.

Belgium recently decided already to halve the maximum duration of visas for Congolese diplomats to six months. The other EU countries have agreed to do so, by the visa regime for holders of diplomatic passports from Congo on aligning. The Belgian minister Didier Reynders said the postponement of the election 'unacceptable. '

Kabila has been president since 2001 and should to the highest court in the Congo remain a successor has been elected, to the anger of some of the opposition. When fights were at least fifty people for the last time.