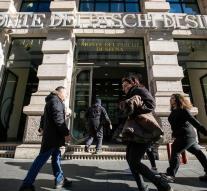 - The rescue of the Italian problem bank gets support from Brussels.

In early June, the Italian government signed a deal with the European Commission on the rescue of Monte dei Paschi di Siena (MPS). It was a principle agreement.

The fact that a bank receives a rescue buck by taxpayers, critics see the ax at the root of the only one and a half year active European Resolution Mechanism.

After banks had to be rescued with state aid during the credit crunch, EU member states switched to a banking union. Banks would take less risk because they had to solve a capital deficit themselves.

The rescue of Monte dei Paschi di Siena (MPS) is mainly seen outside Italy as evidence that the only hard-to-recapitalization of solvable banks is tax-softening.

Eurocommissioner Vestager (Competition) announced in early June that MPS may be rescued under conditions with tax money.