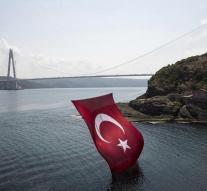 - For the first time since the foiled coup in Turkey are the foreign ministers meeting of the European Union. Bratislava discuss the ministers Friday and Saturday including the relationship with Turkey, which is under pressure since the attempted coup of July 15 because of the numerous arrests of opponents of the Erdogan regime.

The situation in Ukraine, where the Minsk peace agreement is violated almost daily, is also discussed, as well as the common European foreign and security policy.

Saturday breakfast, the 28 EU ministers with the Turkish Minister for EU Affairs Ömer Çelik. Then the four other candidates may for EU- Montenegro, Serbia, Macedonia and Albania- to join a discussion on inter alia the fight against terrorism and radicalization.


Host Slovakia took over the rotating EU presidency on July 1 over the Netherlands. The informal discussions will be chaired by EU foreign policy chief Federica Mogherini.