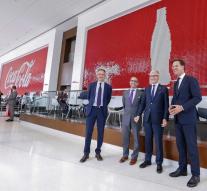 brussels - The Socialist Group in the European Parliament (S & D) will temporarily lost contact with thirteen major international companies. These multinationals refused to go into any of a parliamentary committee invitation that investigates tax evasion and avoidance. See that the Social Democrats as disrespectful and undemocratic.

It concerns include Amazon, Coca -Cola, Facebook, Google, IKEA, McDonalds, and Philip Morris. The 191 MEPs from the S & D group, including three PvdA may temporarily no more meetings with representatives of these companies. This also applies to their employees.

The Social Democrats are the second largest group in the 751 heads parliament. They want a fair tax system for EU businesses.