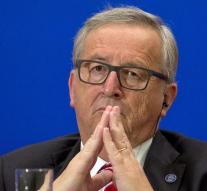 brussels - President of the European Commission Jean-Claude Juncker on Friday his 'greatest solidarity expressed by all the French. '

'I am deeply touched. The Commission and EU countries stand shoulder to shoulder with France in the fight against terrorism within and outside the EU. Our determination is as powerful as our unity. ''

For the European Parliament president Martin Schulz condolences to the families of the victims and wished the injured a speedy recovery. He called the attack,, a shocking, cowardly act. '' He called to be the French people on strong and united against,, this expression of hate. '