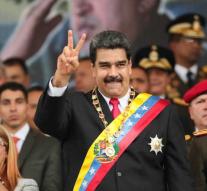 luxembourg - The European Union imposes sanctions on eleven high-ranking Venezuelans in response to the unfair elections in which President Nicolás Maduro was re-elected last month. They are considered guilty of undermining democracy and human rights violations.

Their assets in Europe are frozen and they are no longer welcome in the EU.

In January, the EU already met with seven political and military officials from Venezuela with the same measures. The EU Foreign Ministers decided to add eleven on Monday to consultations in Luxembourg in order to increase the pressure on the regime. In November, the EU forbade the delivery of weapons to Venezuela and other goods that could be used to suppress the population.

Minister Stef Blok (Foreign Affairs) also said after the elections that they were not free and independent. Many of Maduro's opponents are in prison or have fled.