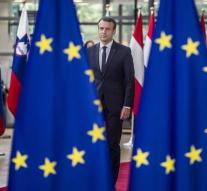 brussels - EU leaders strongly agree to implement the arrangements in the Paris climate agreement quickly and completely. They will also contribute financially to counter global warming. The EU will remain leading in the fight against climate change, confirming it on Thursday in a joint statement after the first day of the EU summit in Brussels.

The agreement remains 'the cornerstone' of the global commitment to tackling global warming and can not be renegotiated, according to the statement. This refers to the agreement reached in Paris by the American withdrawal from the end of 2015.

President Trump announced on June 1 that he wanted to negotiate a 'fairer deal for the US and his workers'.