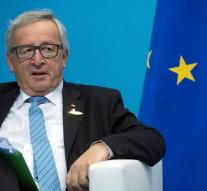 brussels - The European Union has given Italy more help in managing refugee flows on Tuesday. In a letter to Italian Prime Minister Paolo Gentiloni, Jean-Claude Juncker, President of the European Commission, promised 100 million euros in addition to the 800 million that was already laid down.

The letter became public on the day that 13 people were killed on a boat carrying 167 migrants on the Mediterranean Sea.

By 2017, almost 94,000 people from Libya arrived in Italy through the Mediterranean Sea, making Rome available for assistance from other European countries.