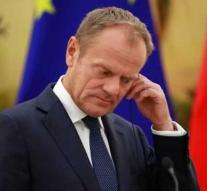 brussels - EU President Donald Tusk wants a special brexit summit in Brussels in November. He writes this to the EU leaders who are meeting this week in Salzburg, Austria. Tusk warns of a 'disaster' if the United Kingdom leaves the EU next year without agreements about the divorce and the future relationship.

'If we all act responsibly, we can avoid a catastrophe', the Pool writes. 'Limiting the damage caused by the brexit is in our best interest. '

The British departure on March 30, 2019 is already on the agenda in Salzburg but there are still some problems that stand in the way of an agreement while time is running out. For example, there is no solution to keep the land border between (the British) Northern Ireland and EU country Ireland open for goods and people after the brexit, as both the EU and the residents want on both sides. Consideration should also be given to tacking the future (trade) relationship between London and Brussels.