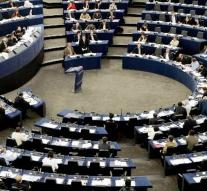 strasbourg - The European Parliament in Strasbourg on Wednesday approved the creation of a European border and coast guard. The informal agreement that the European institutions reached recently, was ratified by a large majority.

Frontex, the European border agency in Warsaw, will be developed and may strengthen the surveillance of the EU external borders from the end of the summer. But that only happens if a Member State can not protect its borders and asks for help.

Member States should be able to deliver quickly in 1500 border guards and all kinds of equipment in the event of a crisis. Netherlands delivers fifty employees to the 'Border Guard pole. The new service is in addition European coordinate the return of rejected asylum seekers.


The legislation was approved in about six months, a record time by European standards.