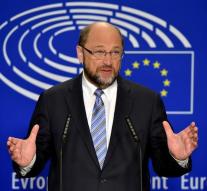 brussels - The European Parliament holds Tuesday in Brussels a special session on the departure of the UK from the EU. That's before meeting EU leaders.

Parliament President Martin Schulz pointed out in a statement Tuesday in Brussels that the parliament according to the EU Treaty is fully involved in 'the separation.'

Schulz also want to know as soon as possible what it's for the beginning of negotiations on the future relationship with the United Kingdom means that British Prime Minister David Cameron only leaves in October and will leave the negotiations to his successor.


He pointed to the need,, stability in these turbulent times, 'and the importance,, mainly to protect the euro against what's been going on now at the fairs.' The news about the Brexit Friday caused panic on Asian and European stock markets.