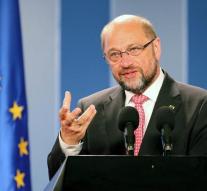 brussels - The President of the European Parliament, Martin Schulz, will Thursday on an official visit to the Turkish President Recep Tayyip Erdogan. The German Social Democrat wants,, political dialogue Getting back on the right track 'and,, all relevant issues, from security to the refugee crisis, openly discuss.'

Erdogan receives Schulz Thursday at his palace in Ankara. Before that Schulz talks among others with Prime Minister Binali Yildirim and parliament chairman Ismail Kahraman, after the Foreign Minister, Mevut Cavusoglu.

Schulz said Wednesday in Brussels that his visit,, also a tribute to all Turkish citizens who crossed the street so courageously to defend democracy in the country. 'He points out that Turkey is a candidate EU country and is a strategic partner.,, We have to talk about the challenges that confront us productively address. '