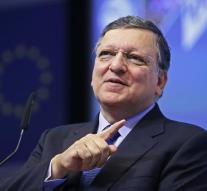 brussels - The European Ombudsman questioned the new job by José Manuel Barroso, former president of the European Commission, the US investment bank Goldman Sachs. Emily O'Reilly asks whether the rules for former directors or committee sufficiently protect the public interest.

Barroso led the European Commission from 2004 to 2014. The mandatory cooling-off period of eighteen months had just ended when the bank Friday announced that the Portuguese had accepted a high post. It was widely spoken shame this step due to alleged conflicts of interest.

The Ombudsman notes that Commissioners also should behave with integrity and restraint after eighteen months according to the regulations.,, Any suggestion that the spirit of the law is ignored risks undermining public confidence in the EU, '' says O'Reilly Tuesday. She has recently called to strengthen the code of conduct committee and sanctions to permit violation.