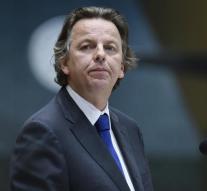 luxembourg - The EU mission is to combat smuggling from Libya, will also help to maintain the arms embargo against Libya. EU foreign ministers agreed Monday formally with the extension and expansion of the maritime mission in the Mediterranean, named Sophia.

Koenders called the situation of migrants in Libya 'dramatic'. Partly because fewer refugees coming from Turkey to Europe, the number of migrants is that they move from Africa dares to again. The European training and strengthening of the Libyan coast guard and navy have this reduction. According to Koenders, the mission of the new tasks make a valuable contribution to saving lives at sea.


Netherlands still investigating whether it will contribute to the mission, which was launched last year and now has been extended by one year. The past year was 139 smuggling ship intercepted and rescued nearly 16 000 lives, according to the EU.