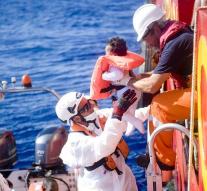 brussels - The maritime EU operation Sophia to combat human trafficking from Libya through the Mediterranean is extended until 31 December 2018. The Member States agreed on Tuesday in Brussels. A week ago, the Italian Foreign Minister left the extension of the mandate.

'I can proudly say that the operation has been extended with unanimous agreement for a year and a half, and is further expanded with a number of tasks,' said EU Foreign Minister Federica Mogherini. One of these is the gathering of information about illegal oil trade from Libya. The mission is already helping train the Libyan coastguard and supervises the implementation of the UN arms embargo against Libya.

Since the launch of Sophia in October 2015, according to the European Commission, 110 people were arrested and sent to Italy on suspicion of trafficking and trafficking in human beings. The Italian government regularly complains that other Member States are not solidarity and do too little to accommodate migrants.