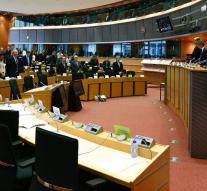 brussels - European Ministers of Justice and Home Affairs in Brussels Friday to try to give a united response to the attacks in Paris. The meeting is dedicated to the fight against terrorism. Netherlands will be represented by Minister Ard van der Steur (Security and Justice).

To prevent jihadists easily come back to Europe after visiting Syria proposed checks of EU citizens to significantly strengthen the EU's external borders. Travelers would " systematic and coordinated " should be checked if they want to enter the Schengen area, it says in the draft text.

Other items on the agenda are speeding up the European system for the registration and exchange of passenger name records (PNR), tighter controls on gun ownership and trade, addressing the financing of terrorism and the exchange of information between intelligence services in Europe