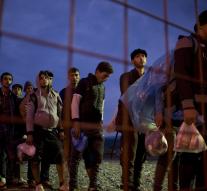 At the EU summit last week promised the government to fulfill their promise to do the refugee crisis to cope with everything. In terms of working hours, the number of delivered border guards, however, only about one quarter of what is necessary, Frontex late Tuesday know.

The officers are deployed to assist in the identification and registration of immigrants in so-called hotspots in the Italian and Greek coast.