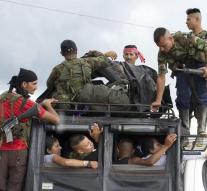 The FARC signed Monday in the Colombian port city of Cartagena a peace agreement with the government, bringing an end to more than half a century of bloodshed.

The FARC is an original leftist guerrillas of the sixties who has focused on include kidnappings and drug-related crime since the nineties. The movement had in those years an estimated 20 000 combatants and acquired the nickname \'narco-guerrillas. Now there are no more than 7,000 FARC combatants to lay down their arms in accordance with the Convention.