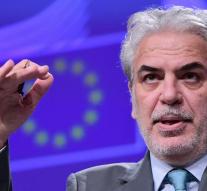 washington - Now that more parts of Iraq are liberated from the terrorist wind of IS, the European Union is also going to provide humanitarian aid in those areas. For example, medical emergency treatment for citizens in the front line is extradited by 30 million euros. Money is also being spent in areas where displaced persons can return.

The end of the military campaign in Mosul marks the start of a new phase of international support for Iraq, declares EU Commissioner Christos Stylianides (Humanitarian Aid) in a statement.

The EU already released 25 million euros in December, especially for humanitarian aid to the people of Northern Iraqi Mosul, where it was fiercely fought. Stylianides completed this in March with another 42.5 million. Since 2015, the union has spent more than 340 million euros on aid for Iraq. Apart from that, Member States have support programs.

An estimated 13 million Iraqi people are dependent on humanitarian aid.