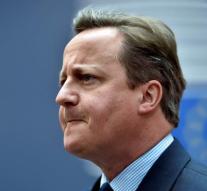 brussels - May not be his last supper, but an uncomfortable dinner awaits British Prime Minister David Cameron on Tuesday. Around 19:30 EU leaders in Brussels were on the table for their 'brexitdiner.

On the menu is a hearty round of talks on how Cameron intend to deal with the not yet officially announced the separation of the UK. He wants to raise this over the summer, but most of Europe will soon clear.

Earlier in the day, as the 'black sheep' still with the traditional 'family photo'. All political leaders are photographed as a group during EU summits. Cameron was just before Chancellor Angela Merkel, on the side of the company.


The expectation is that dinner is no night work. For cozy linger too tense atmosphere according to insiders.