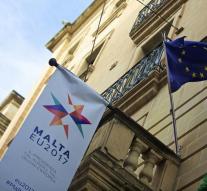 valletta - The 28 leaders of the European Union come together Friday in Malta. An important objective of the summit is the number of people who dare to cross into Europe via the Mediterranean to reduce.

In the morning, the political leaders consider proposals designed to prevent migration from Libya, including by strengthening the Libyan coast guard. Also support other African countries is on the agenda.

During the second session, they examine from 17. 00 on the future of the European project after the brexit. British Prime Minister Theresa May is not invited.

Donald Trump and other international challenges ' '' pass by during lunch, which they cross the bay in the capital Valletta. EU Minister Donald Tusk, who will chair the meeting, US President echoed this week by the EU threats.

The summit in the enactment starts at 10. 00 hours. On behalf of the Netherlands, Prime Minister Mark Rutte present.